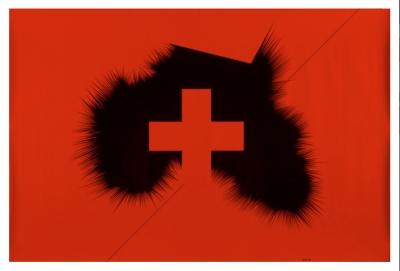 Something about HIV/AIDS awareness posters fascinates us, and has over the past two and a half decades resulted in numerous exhibitions (e.g. National Library of Medicine, Monash University, AIDS Action Council, Country Awareness Network, UTS), collections (e.g. UCLA, AVERT, Cornell University, National Library of Medicine, Wellcome Library), projects (e.g. The Art of AIDS Prevention), and books (e.g. Visual Strategies Against AIDS). But why are we so intrigued by this particular area of visual communication? Is it because of the many ‘taboo’ subjects that the campaigns must navigate (e.g. condom use, homosexuality, death, illness, drug use, ethnicity)? Is it because encouraging sustained safer sex practices is such a problematic endeavor? Is it because the posters introduce us to the visual language of different cultures? Is it because many of them are humorous (intentionally or unintentionally), ‘risky’, provocative, clever, or beautiful? Or is it because we like seeing visual communication used to ‘do good’? A new exhibition, Graphic Intervention: 25 years of International AIDS Awareness Posters, 1985-2010, curated and organized by Elizabeth Resnick and Javier Cortés for the Massachusetts College of Art and Design (Boston, Massachusetts, USA), gives us a renewed opportunity to ponder these questions.

Beyond the visual representations we see, are highly complex issues dealing with sociocultural discourses, politics, psychology, history, media and marketing; issues that profoundly affect how the posters are designed, which messages they carry, how they are perceived, and how effective they are. The visuals contribute on many levels to the cultural meanings associated with the multitude of HIV/AIDS epidemics, spanning across national, social, ethnic, religious, and sexual groupings. Not only does culture influence the design of campaigns, campaigns in turn influence the way in which HIV/AIDS is culturally understood. As a result, discrepancies exist between the general assumption that HIV/AIDS awareness campaigns are inherently benign, because they are designed to benefit the health of individuals and society; and the critique from a number of cultural critics and analysts who believe that the campaigns are in many ways coercive instruments of power, designed to control our sexual practices and perceptions of minority populations and people living with HIV/AIDS.1, 2, 3, 4

What follows is a discussion of a selection of the many complexities which lie behind the visual language of HIV/AIDS awareness posters.

It has been noted that in western countries since the mid-1990s the focus has shifted from the domestic epidemics to the African epidemic.5 As the visibility of HIV/AIDS within western countries themselves has diminished, the visibility of the African (Caribbean, Papua New Guinean…) ‘other’ with AIDS has increased; as one critic argues: “the image of African women who get HIV/AIDS from their unfaithful partners, then pass the disease along to their innocent babies, evokes more empathy than the faces of those who comprise the domestic epidemic.”6 Through benevolent charity appeals (e.g. Figure 1) and media representations we thus project HIV/AIDS onto ‘helpless’ and ‘hopeless’ Africans, and in this way ‘our’ safety is reaffirmed by gazing at the suffering of others in far off places;7 what Stuart Hall describes as ‘the spectacle of the other.’8 When viewing posters that are meant as charity appeals, one might question how the visual language is impacting on our perception of those for whom the appeal is issued?

When viewing international collections of HIV/AIDS posters, one immediately notes the differences between the visual language and messages displayed in western and non-western cultures. Though they were produced as serious vehicles of communication within their specific culture, posters from non-western countries might seem fascinating, curious, humorous, exotic, or even naïve to western eyes. These posters, however, tend to display a frankness and practicality surrounding the issue not present in many western campaigns, which frequently tend to be more focused on clever design, subtle messages and advertising strategies. The woman in Figure 2, for instance, simply states, “I know you are not faithful,” while Figure 3 pragmatically asks, “if I am infected by the AIDS virus then who will catch the fish?” What might western campaigns look like if they implemented a similarly matter-of-fact approach?

Cultural historian Sander L. Gilman has suggested that there is a curious absence of ill and dying bodies in HIV prevention campaigns.9 He notes that even the body with AIDS is portrayed as attractive and beautiful, showing no physical signs of disease (see for example Figure 4). He also points out that death is only present through symbolism, for instance in the form of skulls, skeletons, or tombstones, not through representations of the dying or dead body. Figure 5 illustrates this point clearly; it features a skull made up of beautiful bodies. Some exceptions exist, such as the (in)famous United Colors of Benetton advertisement, featuring a man dying of AIDS (Figure 6).10 Furthermore, in developing countries the ill body is more prevalent (e.g. Figure 7); perhaps because people there are to a larger extent visibly ill and dying of AIDS, compared to western countries with better access to HIV treatment. When viewing the exhibition, one might ask, how the absence of ill bodies and prevalence of attractive bodies affects our perceptions of HIV/AIDS? What does the symbolism of death, as opposed to actual discussion of the contemporary lived experience of HIV/AIDS, do to our beliefs about the epidemic? 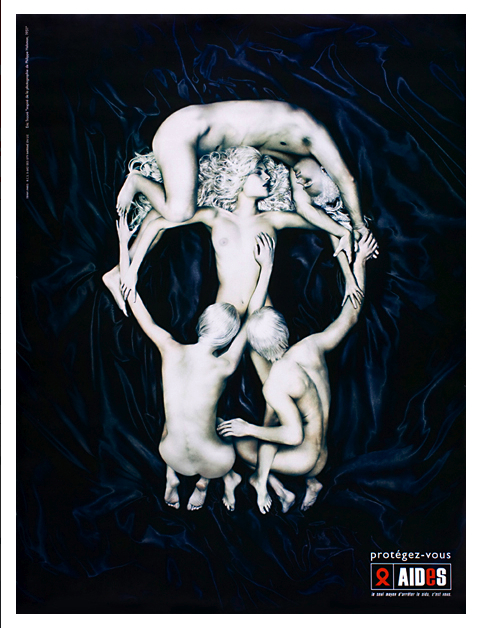 Fear appeals can be defined as “persuasive messages that emphasize the harmful physical or social consequences of failing to comply with message recommendations.”11 Though much research has been done to determine the effectiveness of fear-based strategies in HIV prevention the results are inconclusive.12, 13 Much of the research, however, seems to suggest that if fear is to have any positive effect the message must include certain components: 1) the threat must be perceived as likely and relevant to the viewer; 2) the viewer must believe that he or she has the ability to follow the message recommendation; and 3) he or she must believe that the recommendation will eliminate or reduce the threat. Some argue that if used incorrectly fear appeals are not only ineffective, but they may in fact be counterproductive.14, 15 These are elements worth considering when viewing those posters in the exhibition that use fear as a strategy. For example, when examining Figure 8 and 9 one might ask: What are the consequences implied by the posters, and are these likely and realistic – e.g. does AIDS still equal death in western Europe as Figure 5 implies? Is it clear what the threat is and how it applies to the viewer? Is it clear what the viewer must do to avoid the threat of AIDS? Is it clear how these recommendations reduce or eliminate the threat?

Increasingly those producing HIV/AIDS awareness graphics are incorporating “the use of marketing to design and implement programs to promote socially beneficial behavior change”;16 this has been termed ‘social marketing’. The premise being that rather than promoting a commercial product, a ‘social product’ is being promoted.17 One might say that in the case of HIV/AIDS the advertisements aim at ‘selling’ safer sex. This often means that HIV/AIDS awareness posters look similar to commercial advertising posters. For instance, chiefly display ‘ideal’ attractive bodies (e.g. Figure 10). Furthermore, in contrast to fear appeals that highlight the negative aspects of not using condoms, they highlight the positive aspects of condom use (safe sex is ‘sexy’, ‘fun’, ‘titillating’, ‘reassuring’, etc.) (e.g. Figure 11); or they use humor to capture the viewer’s attention (e.g. Figure 12). But how does the idea that health promotion graphics must compete with commercial advertising impact on the way in which the visual narrative of HIV/AIDS is told? Is it an advantage or disadvantage that they blend in or stand out from the plethora of advertising messages in the public sphere? 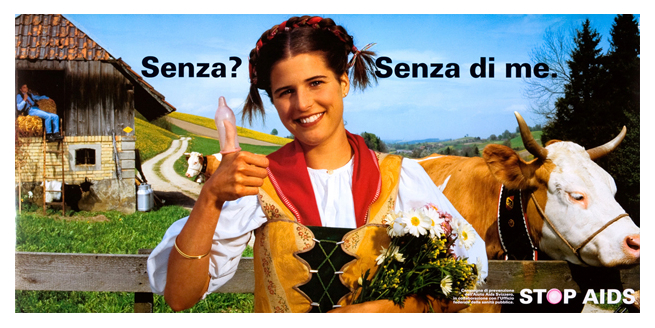 Though these are but a few of the many questions and issues connected to HIV/AIDS awareness posters, they give a small insight into the complexities that lie behind the representations we see, and perhaps allow us to explore the posters anew. For those unable to visit the exhibition in person, the excellent website allows for extensive online viewing of the exhibition.

Article/Review © Louise Kolff; all images © the creators and/or commissioning organizations. Presented here with permission of the exhibition curators.

Louise Kolff is a PhD candidate at the College of Fine Arts and the National Centre in HIV Social Research, University of New South Wales, in Sydney, Australia. Her article, “Dilemmas of Claiming Ownership in an Epidemic,” appeared in GLIMPSE issue #1, Is the Visual Political? in November 2008.

Chronicling an ever-changing city through faded and forgotten artifacts

Considering the illuminating differences between human and camera imaging

The Art of Science

Exploring the connections between art, technology, literature, and science

Itineraries of curious objects and collections.

the art + science of seeing

WordPress.com is the best place for your personal blog or business site.